Legendary Raasacharya, Padmashree Hargovind passed away at the age of 91 on 25th July, in the afternoon, suffering from age related ailments. Brajwasis paid their tribute to this legendary person as he was cremated and became one with the dust of Vrindavan. Padmashree Hargovind was a huge name in the raaslila performance culture and he is survived by his two sons, who are also noted raaslila acharyas.

He first stepped into the culture of raaslila performance at the age of eight when he played the role of Krishna in the raaslila troupe of Swami Kishan Lal of Vrindavan.  Swami Kishan Lal was a legendary raasacharya of his time. Swami Hargovind formed his own troupe in the year of 1945. He also received many awards apart from the Padmashree in his lifetime.

The Gauranga Lila style of performance, which focuses on the pastimes of Chaitanya Mahaprabhu was started by him. This made him notedly different from the other raasacharyas of the time. His first performance outside of Vrindavan was in Delhi at the Ramlila Maidan. After that he also performed internationally, becoming famous in Singapore, Thailand and several other countries.

His last direction was in Sinhastha Kumbha in Ujjain. Before that he has directed the ‘Gauranga Lila’ on the banks of the Yamuna to commemorate the 500th anniversary of Chaitanya Mahaprabhu’s arrival in Vrindavan.

Thousands of Vrindavan residents, which included raasacharyas, devotees, respected citizens and political leaders accompanied the funeral procession till the cremation ground, bidding farewell to this legendary personality of Vrindavan.

The first Monday of Shravan is considered auspicious by the devotees of Lord Shiva and thousands of them were seen outside these temples, queuing up to offer ‘bilva patra’ and milk to the Lord. Apart from this, honey, sandalwood paste and leaves of wood apple were offered to the Shiva lingas in the temples. Elaborate arrangements were made in order to make sure that the devotees did not suffer any inconveniences.

The Vrindavan Chandrodaya Temple is not only talked about  for its Tall & impressively slender structure but the most interesting part is about the construction and which is brought in the limelight by Hindustan Times in its Agra edition Newspaper , dated 20th July 2016. 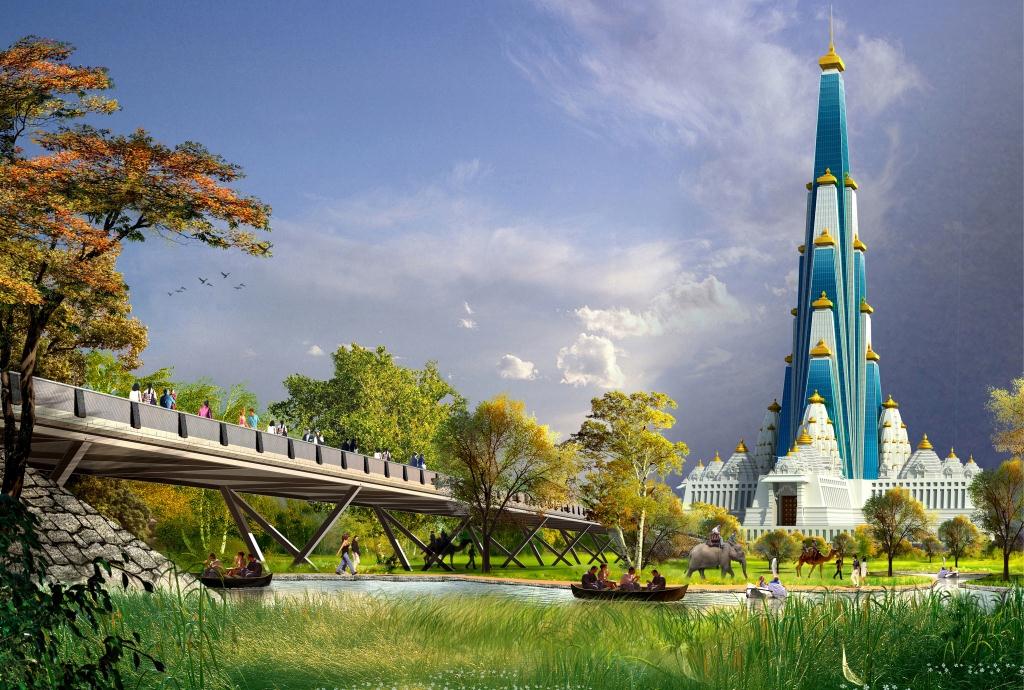 An overbridge towards the Entrance to the Mandir

Both in terms of funding and logistical support this temple is uniting people from several religions and nationalities across the globe. It is said that the project is more spiritual than religious. Apart from the main temple structure, the temple will be surrounded by forests, clear water lakes, waterfalls from hillocks – all recreated from descriptions in the Srimad Bhagvatam and other attractions will include a Yamuna Creek, Bhagvad Gita Expo and a Krishna Heritage Museum.

Once on top of this 700ft structure, the temple promises to provide a spectacular view. It is being designed to have minimum radiative  heating of the internal environment. The temple is also being designed to withstand strong wind load and intense earthquake tremors measuring upto 6.8 on the Ritcher scale. 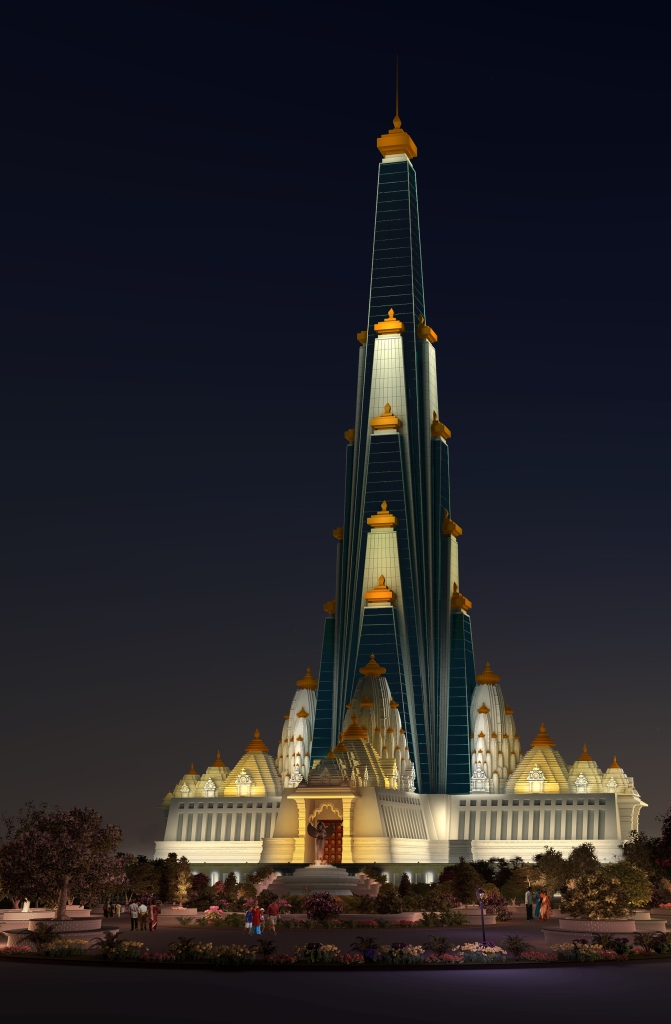 Right at the feet of Vrindavan Chandrodaya Mandir, the world’s tallest Krishna Temple - Krishna Bhumi would have its existence promising the entire world a state of perpetual union with Lord Krishna.

Guru Purnima is around the corner and all outside vehicles have been restricted from coming into Vrindavan from 16th to 20th July. The reason is that hundreds and thousands of people will visit Vrindavan during this period to pay their respects to their Gurus.

Hence, if outside vehicles are not stopped, it could cause a huge traffic menace. Extra police forces are also being deployed on all of the main roads of the city to avoid congestion from vehicles inside the city. CCTV cameras have also been installed so that the police can keep an eye on all the main points of the city.

The vehicles that come from outside the city during these days from the Yamuna Expressway will be diverted to Mathura via Raya. The same procedure will be used for traffic coming in from the National Highway 2. Parking spaces have been prepared at Chhatikara Road and opposite Rukmini Vihar along with Daruk and Braj Health Care area.

People coming in from outside can park their cars here and then enter the city. Those coming from the Yamuna Expressway will have to park near Pani Ghat or Pani Gaon. There are provisions to control emergency situations as well.

The six day long ‘Pran Pratishtha’ Mahotsav has started at the Lord Varadraj Temple in Vrindavan. It is a ceremony by which a deity is consecrated in a temple. The temple is located in the Bada Khatala Ashram area and the ceremony began with the kalash yatra done by 1008 women from the temple to the Kesi Ghat.

The women were dressed as gopinis and along with them pairs of camels and horses were also a part of the Kalash Yatra festival. The procession passed through many markets, including Chungi Chauraha and Gopinath Bazar. After fetching water from the Yamuna, the women returned to the temple and began the festivities.

There were a group of devotees along with these women the entire time who were singing bhajans for the Lord. Saints and devotees from all over the country have come down to Vrindavan to view this festival and witness the cultural programmes like Sadhu Vani, Bhajan Sandhya and cultural drama.

Vrindavan turned into Shrikshetra on Wednesday to celebrate the festival of chariot (Rath Yatra), when thousands of devotees thronged on the streets and at Gyan Gudri  to pull the chariots of Bhagvan Jagannath. The procession reminded many devotees the Rath Yatra of Puri. The festival of Jagannath Rath Yatra was observed with reverence in several parts of Vraja.  People could be seen throwing flower on the chariots carrying the Lord.

The chariots from different temples of Vrindavan congregated at Gyan Gudri, the place where the Gopis preached about the Divine Love to Uddhav. Traditionally, the temples of Govinda, Gopinath, Madan Mohan, Jagannath Ghat, Sadhu maa ashram along with some other temple used to send the chariots having Jagannath seated in it to Gyan Gudri. Later several other temples also began sending the chariots there.  At Gyan Gudri a special arati and puja is performed to the Lord, and bhog is offered to Bhagvan Jagannath. Then the Prasad is distributed among the devotees.

Gyan Gudri has a relevance of the manifestation of the Divine Love, as the Gopis preached Uddhav about it. Krishna took the form of Jagannath after remembering the Divine Love of the Gopis. Once, Mother Rohini was narrating Krishna’s intimate Vrindavan pastimes to His Queens. Subhadra was asked to watch the door so nobody else could listen.  Krishna and Balaram came to the door and stood on Subhadra’s left and right sides. Krishna and Balaram became ecstatic, and their internal feelings were exhibited externally. Their eyes became dilated, their heads compressed into their bodies, and their limbs retracted. Seeing these transformations in Krishna and Balaram, Suhhadra also became ecstatic and assumed a similar form. Thus, by hearing Krishna’s pastimes in Vrindavan, Krishna and Balaram, with Subhadra in between, displayed their ecstatic forms of Jagannath, Balaram and Subhadra.

The 50 years old Jagannath temple of the Jagannath Ghat started the celebration from early morning by maha-arti of the Lords followed by lunch for saints and general public. Devotees started gathering at the temple from morning itself to get a glimpse of the Lord and to push his chariot. Lord Jagannath came out at around 4 pm, after being ill for 15 days, during which he didn’t gave darshan to his devotees.

Jagannath Yatra celebration in other Temples

Vishram Vat temple took the Lord on a round tip of Vrindavan via parikrama marg, whereas others just went to the main areas of the city to bless the devotees and please the Lord. Few temples will be doing the Jagannath Rath Yatra celebration later this week as well.  The Rath Yatra was also taken out from Shri Krishna Janmabhoomi Mandir in the city of Mathura, where devotees thronged to have a glimpse of the Lord and seek his blessings.