Navratri marks the beginning of nine holy days, the worship of Goddess Durga, celebrating the victory of good over evil, Ma Durga’s victory over Mahishasura. Navratri means nine nights because in Sanskrit ‘Nav’ signifies nine and ‘Ratri’ means night. The festival is celebrated across India with great show and fervour, including Vrindavan. The nine-day festival commenced October 10 and will end on October 18 this year, and is dedicated to Parvati in all her nine avatars. Symbolising the triumph of dharma over adharma, Navratri holds a special significance in India.

Significance of All Nine Days 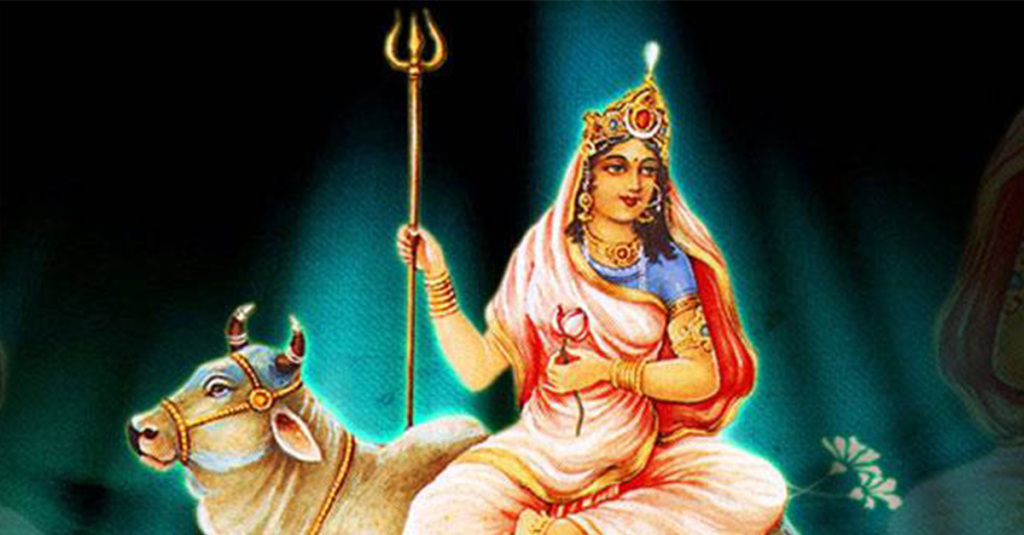 On the first day of Navratri, Parvati’s incarnation, Shailaputri is worshipped. And this avatar of Durga signifies the concerted power of Brahma, Vishnu, and Maheshwar. The devotees worship her as the consort of Mahadev. On this day, Durga’s embodiment signifies nature and purity. 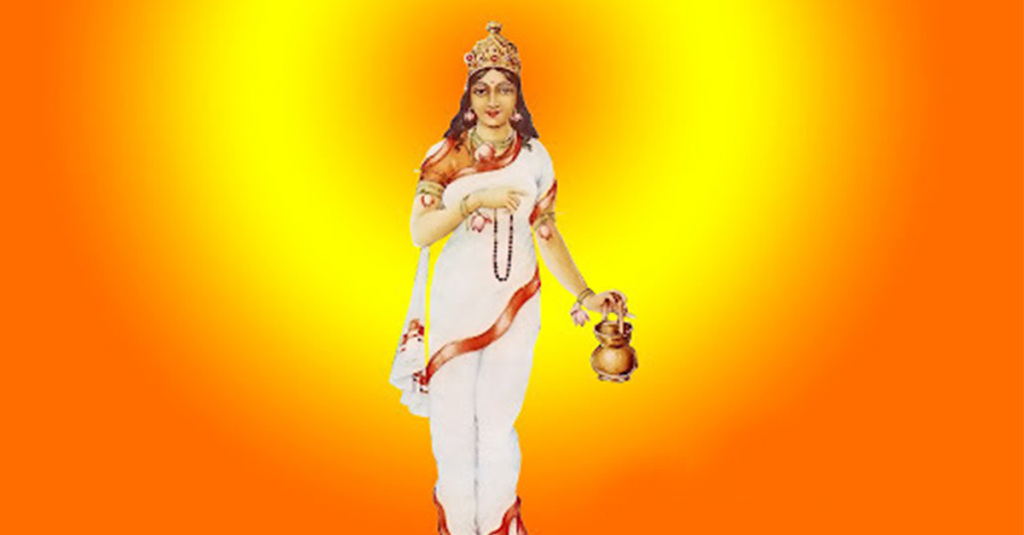 The second avatar of Parvati, Brahmacharini, is worshipped on day two of Navratri. On this auspicious day, Ma Durga looks blissful, blessing all her devotees with happiness, peace, refinement, and prosperity.

On day three of this festival, Ma Chandraghanta is worshipped, signifying courage and bravery. This incarnation of Parvati rides a tigress, representing beauty and grace. Ma Durga bhakts worship her for peace and prosperity in life. 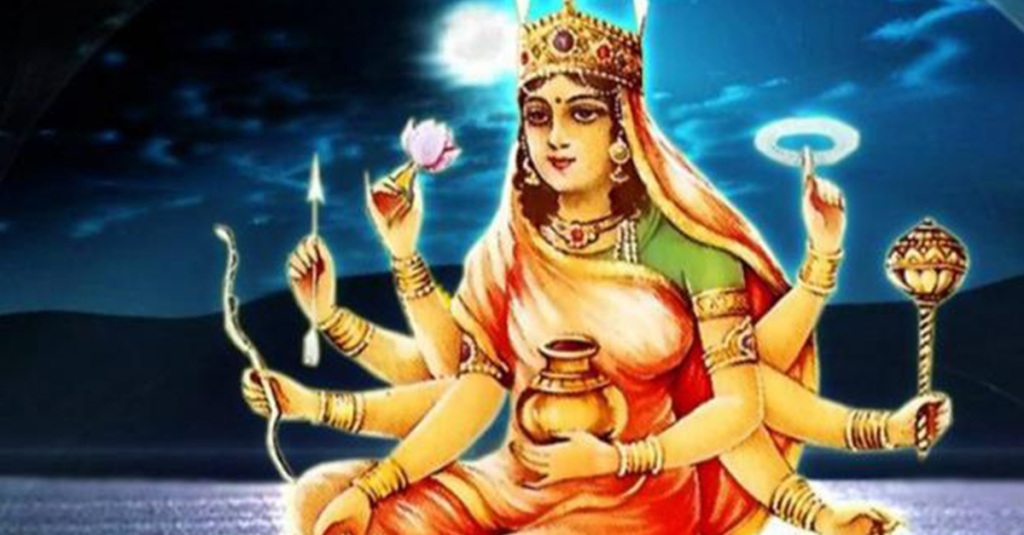 The fourth day of Navratri is celebrated in honour of goddess Kushmanda, an embodiment of Parvati and perceived as the creator of our universe. 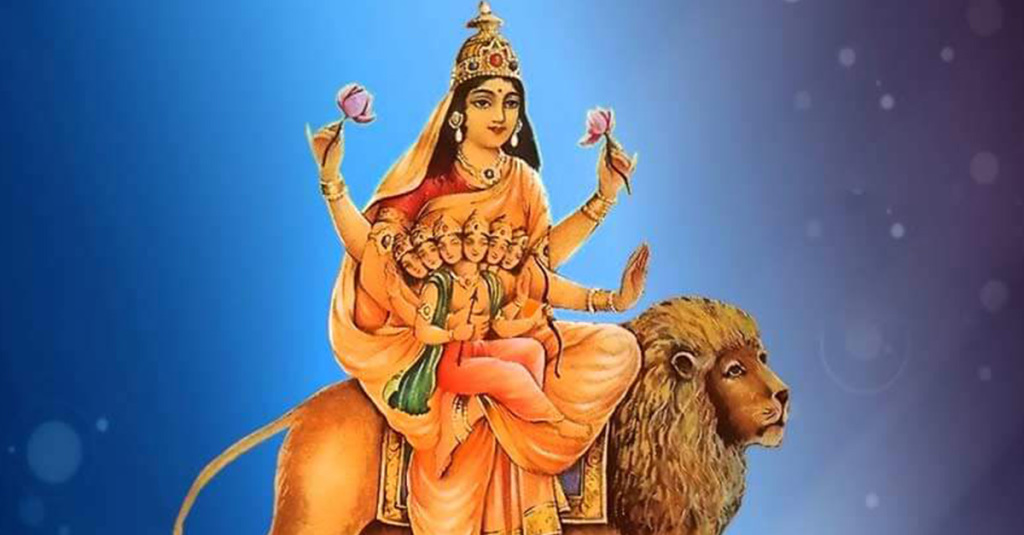 Goddess Skand Mata is worshiped on the fifth day of Navratri. According to Hindu mythology, Skanda is the mother of Karthikeya. The gods chose Devi Skanda to become the chief warrior to fight the demons. The goddess signifies the courage and valour of a mother, who can fight any evil when it comes to the protection and safety of her child. 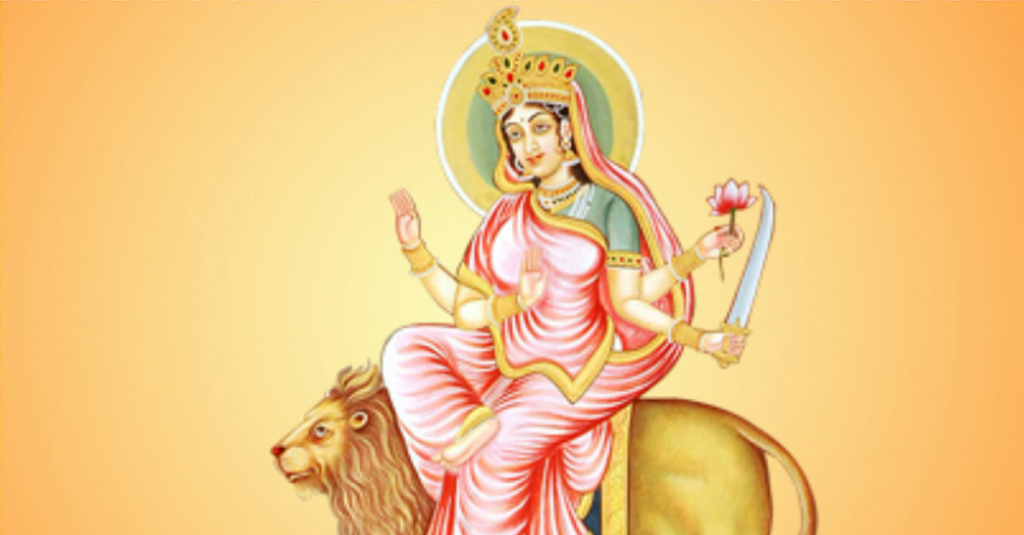 The sixth day of Navratri is celebrated in the honour of Mata Katyayani, who took on Mahishasura. She appears as a warrior on this auspicious day, symbolising courage. 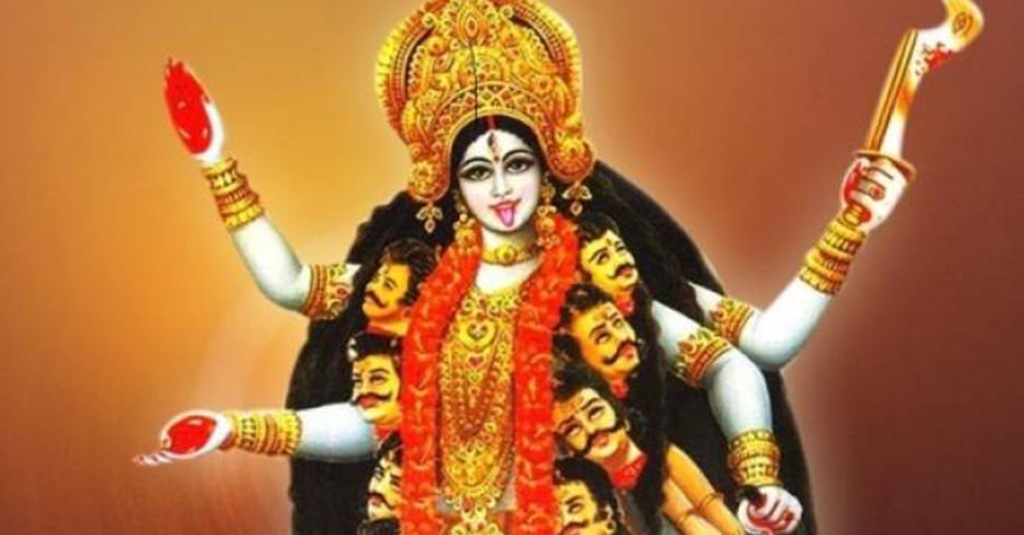 Goddess Kalratri is worshipped on the seventh day of Navratri. Ma Durga appears in her fiercest form with a dark complexion and disheveled hair. As the incarnation of Durga, Devi Kalratri defeated many demons in a battle against Mahishasura. 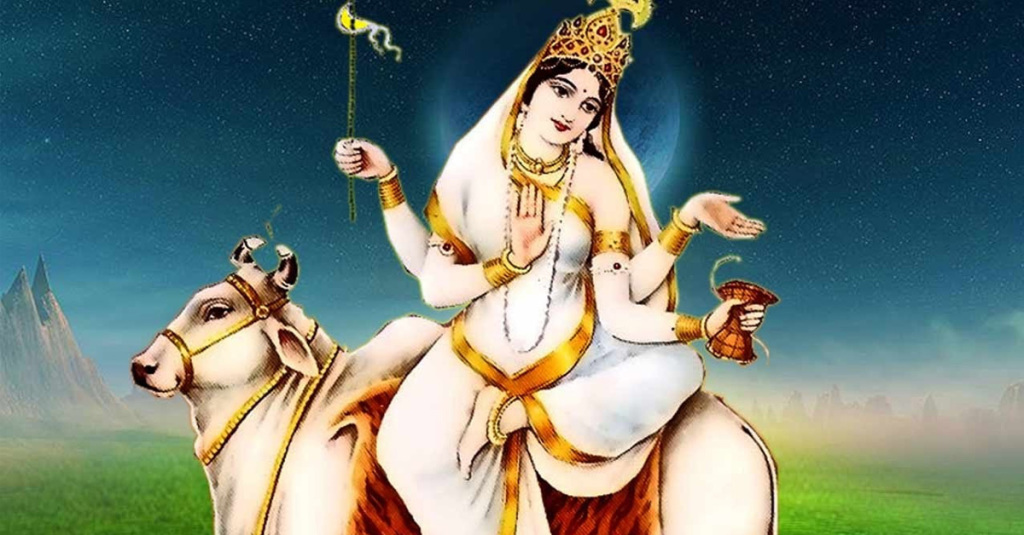 On this day, goddess Maha Gauri is worshipped in her eighth avatar, representing peace, intelligence, and prosperity. 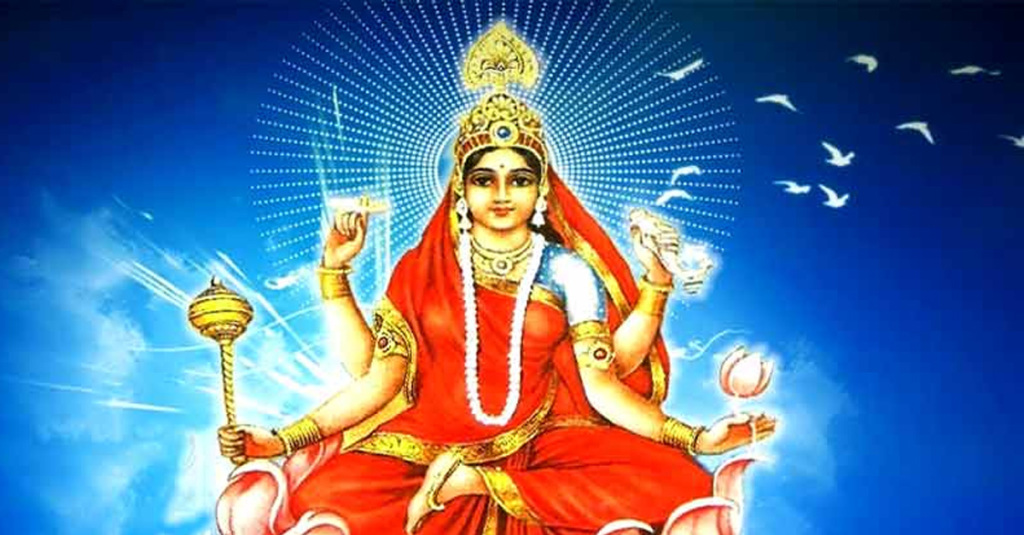 The final day of Navratri is celebrated in the honour of Siddhidatri, who is believed to have healing powers. On this day, the goddess appears in an idyllic state of mind, just as the blue sky on a clear, bright day. On this day, Devi Siddhidatri sits on a beautiful lotus flower and rides a lion.

People celebrate Navratri in the holy Braj and other parts of India by observing fasts and dressing up beautifully in bright colours. The festival is celebrated in the holy town with much grandeur and fanfare. Durga bhakts offer pujas and prayers to please the nine forms of the goddess. You can be a part of Navratri celebrations through a Krishna Bhumi Holydays membership and spend seven days every year in Vrindavan.

Every festival has its significance in Vrindavan, and Navratri is no exception. Every Navratri, nine nights are spent worshipping Goddess Durga, the female deity representing Shakti or divine energy. This year the festival starts from October 10 and ends on October 18. During the festival, crowds assemble at the Katyayani Temple in Vrindavan to worship Devi Durga, where the cow-herding maidens or gopis prayed to Ma Durga to get Shri Krishna as their husband. Read this blog to learn more about Navratri, its significance, and celebrations in Vrindavan: 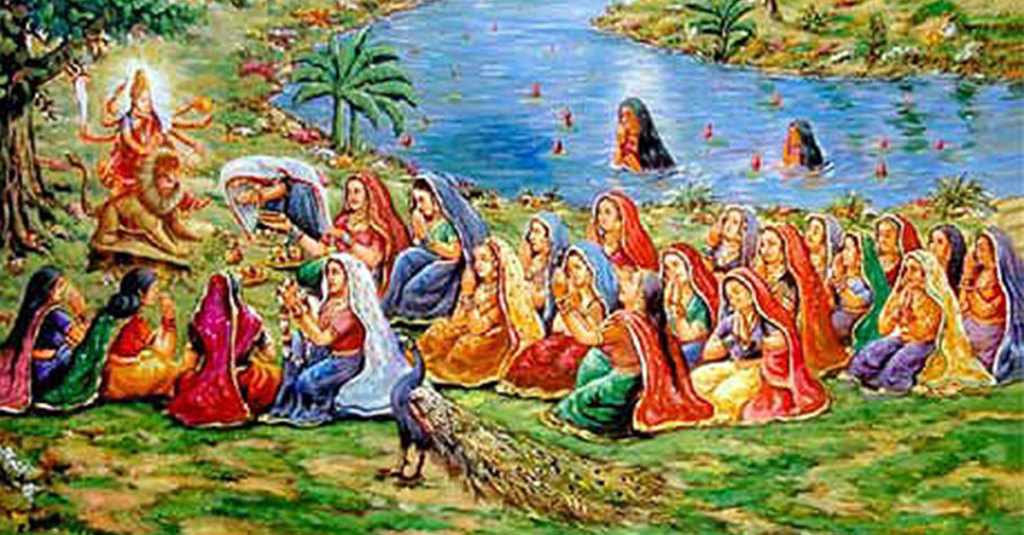 Srimad Bhagavatam 10th Canto, Chapter 22, beautifully describes how the gopis of the holy Braj worshipped Katyayani. The classic describing the life and times of Devakinandan also includes the gopis’ prayers:

“O Katyayani! Hey! Hey Mahayogini! Oh, all-powerful goddess! We bow down to you and beg you to make the son of Nand our husband.”

According to Hindu mythology, Ma Durga is believed to be a Brajwasi too because she was born in Gokul as the twin sister of Lord Krishna. Though there are numerous Shakti temples in the holy town of Vrindavan, the Katyayani Temple has a special connection with Devakinandan’s pastimes in Vrindavan, where thousands of worshippers offer their prayers and light lamps for the Goddess of Shakti during Navratri. 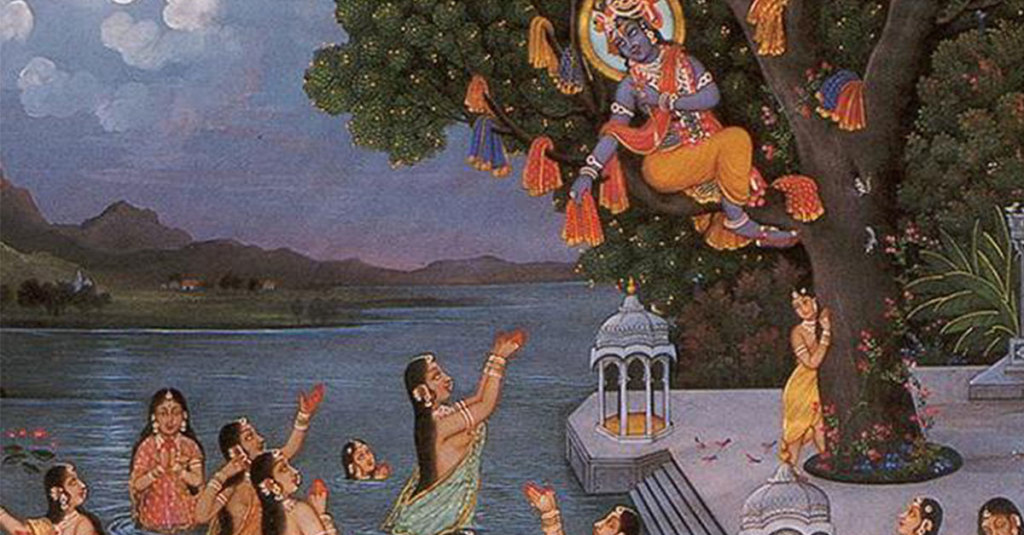 When the Braj gopis lost their heart to Devakinandan, they prayed to Mata Katyayani. After they continued their worship for a month with great devotion and persistence, Shri Krishna fulfilled the maidens’ desires by stealing their outfits when the gopis were bathing in the holy Yamuna on the final day of that month. Shyamsundar made nectarine jokes about the gopis, all of which were related to their feelings for Krishna. Finally, the Supreme Godhead, pleased with the gopis, performed the Maharasa with them. 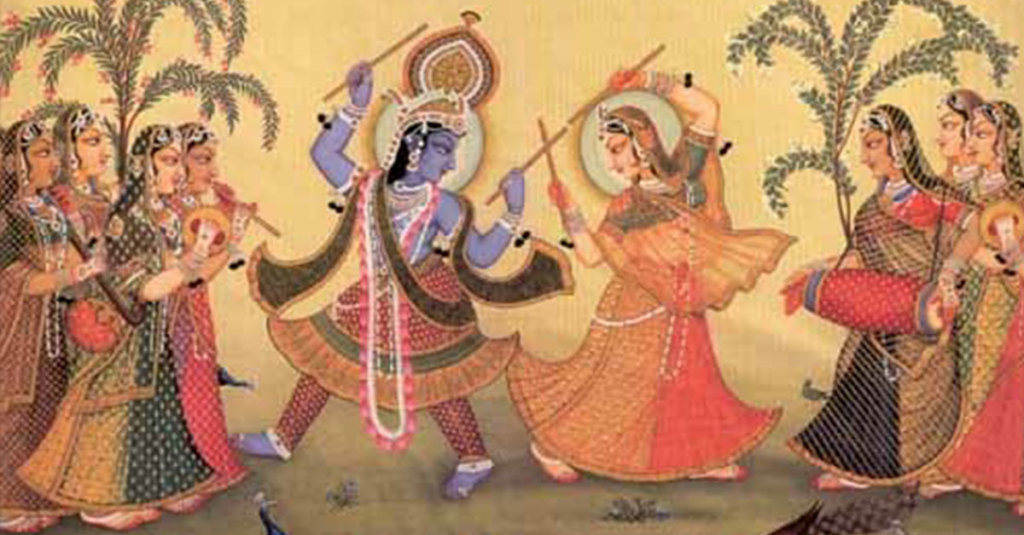 During Navratri, the dance of joy or Rasa of Shyamsundar and the gopis are performed. Though Navratri is associated with Ma Durga, Dandiya is actually related to Shri Krishna and His dance with the gopis, especially Radha. The dance represents realisation, signifying the joy and contentment of the mind that becomes purer and composed because of the greater understanding of the inner self.

Navratri is celebrated in most of the households of the holy Braj. Every devotee prays to Mata Katyayani or Durga to achieve success before taking up any challenging task. During this festive occasion, Vrindavan becomes lively. In the mornings, the Brajwasis invite young girls to their abodes and honour them with beautiful gifts and specially-made food for the occasion. The streets of Vrindavan come alive with kirtans and processions.  Fairs are also held during the evenings for children outside Katyayani temple, at the showground. In all neighbourhoods of the holy Braj, Ma Durga is worshipped during Navratri. After the ninth day, the idols are dismantled, implying the transient nature of all things material.

Only words cannot describe the magic of Vrindavan during Navratri. You need to be present in the holy Braj to soak in the beauty that pervades the air. Opting for a Krishnabhumi Holydays membership will let you be a part of these festivals in Vrindavan and spend 7 days every year in the holy Braj. You can also own a home in Krishna Bhumi, providing world-class living spaces, just 20 minutes from Katyayani Temple and a couple of minutes from the Banke Bihari Temple.

The eternal love story of Radha and Krishna is one of the most fascinating ones in Hindu mythology, symbolising the powerful bond between the divine couple. But what happened to Radha after Krishna left Vrindavan? Did the divine couple meet again? Was their separation the end of their sacred love and bonding or was it a new beginning? Let’s find out the answers. 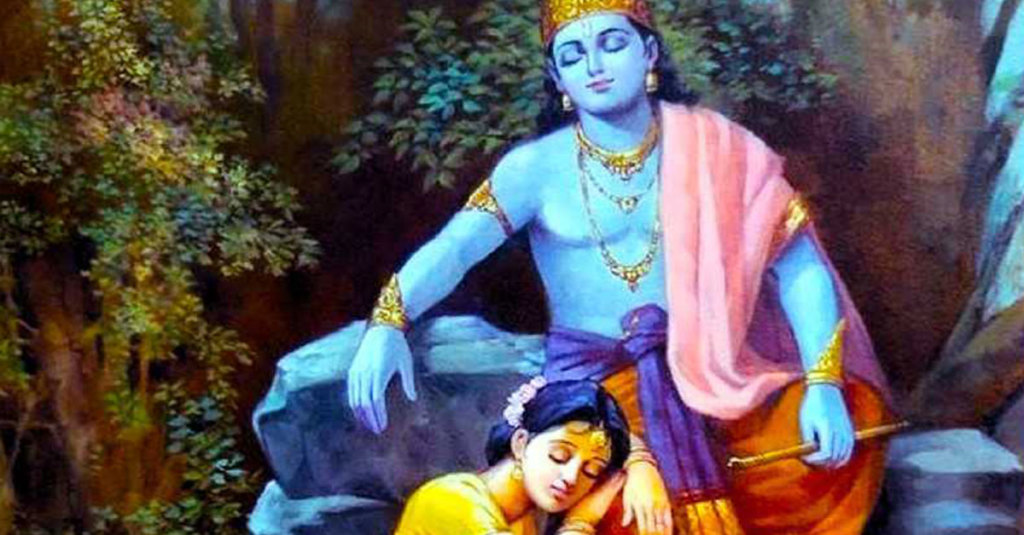 When Shri Krishna travelled to Mathura to kill king Kamsa, it was a heartrending experience for Radha and the brajwasis to see the Lord going away. Thus, the news of Radha and Krishna’s separation hung as a dark cloud of sorrow and grief over entire Vrindavan.  Before moving to Mathura, Devakinandan spent His last moments with Radharani in absolute peace and silence because silence is often more powerful than words to understand the feelings between two lovers. Radharani and Shyamsundar were two bodies and one soul, they were indivisible even when the Lord was not present with her physically. Such was their love and dedication for each other.  Though the divine couple parted, they were never apart because Devakinandan lived in Radha’s heart and Radha in the Lord’s heart.

After Krishna became the king of Mathura after slaying Kamsa and Shishupala, Radharani spent her days with Devakinandan’s memories. However, she got married to Abhimanyu, a boy belonging to the Yadav clan.  It was the turning point in Radha’s life.

Many years later, when Radharani was weak and old, yet stunningly beautiful, she walked for many days and finally reached Dwarika just to see Lord Krishna once. By that time she was free from all domestic responsibilities. Entering Krishna’s palace, she caught a glimpse of Devakinandan and was awestruck by the Lord’s godly beauty.

Radha and Krishna’s Separation for the Second Time 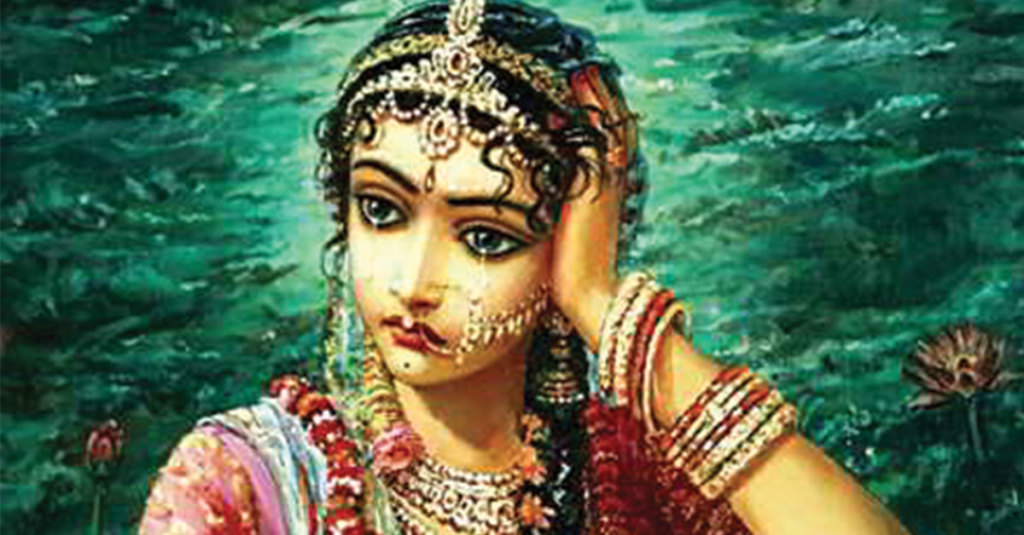 Radharani joined Krishna’s service in His palace, as a maid with the Lord’s permission, only to catch a glimpse of Krishna every day. But she soon realised that her separation from Devakinandan increased her pain though being physically present near Shyamsundar. Therefore, Radha decided to leave the palace unnoticed. She kept walking on the roads without knowing where she was heading, unaware of her surroundings. 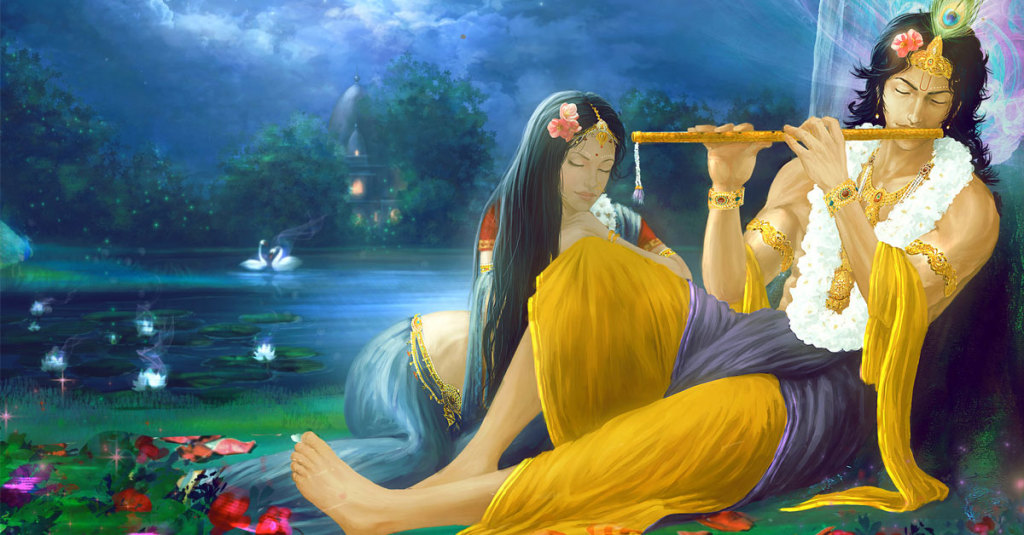 After Radharani left Krishna’s palace, He followed Radha. Being the supreme Godhead, He knew where Radha was going and met her when she needed Him the most. When Shri Krishna appeared before Radharani, the Lord’s godly touch brought her to consciousness. Krishna Priya smiled at Shyamsundar, and was enthralled by His divine form.

Both Devakinandan and Radha knew that their last moments had arrived, and realising this, Krishna wanted to give something to Radha. Though Radha denied taking anything from the Lord initially, later she agreed to listen to the flute played by Shyamsundar. Listening to the divine music played by Krishna, Radha finally merged in the Lord. Because Radha was extremely fond of Krishna’s bansuri, He dedicated the flute to her and promised to never play it again.

The love between Radha and Krishna is not just ordinary bonding between a man and a woman. Radharani was Krishna’s keen devotee.

What better way to feel Radha’s unconditional love for the Lord in the holy Braj where Devakinandan spent many special moments as a child, youth, and lover. Own a home in Krishna Bhumi and raise your family where it all began. You can also experience Vrindavan like never before and spend 7 days every year through a Krishnabhumi Holydays membership.