The love story of Radha and Krishna is perpetual and awe-inspiring, a symbol of the divine union between Paratmatma and Jivatma, the universal self and the individual self. The tale of Shyamsundar and Radhika is a beautiful legend celebrated across thousands of years.  And Krishna devotees across many generations are still fascinated by Radha-Krishna romance. In fact, the names of Radha and Krishna are always spelt out in one breath, implying without Radha, Krishna is not complete and without Shyamsundar, Radha is incomplete. So, here are some life lessons to learn from the love story of this divine couple: 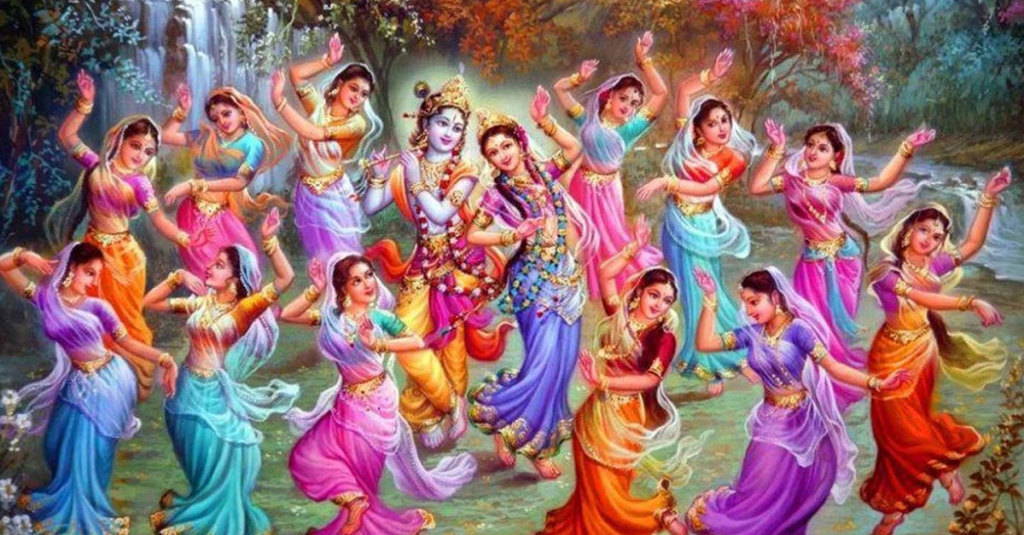 Radhika, Goddess Shakti’s avatar, was an ardent devotee of Devakinandan, and when the Lord played His flute in the beautiful forests of Vrindavan on a full moon night, the gopis listened to the tunes emanating from Krishna’s flute. Radhika, on the contrary, used to be so mesmerised that she would forget everything and start dancing around natkhat Krishna. So, if you truly love your partner, you will be completely devoted just as Krishna Priya (another name of Radha) was devoted to Devakinandan. 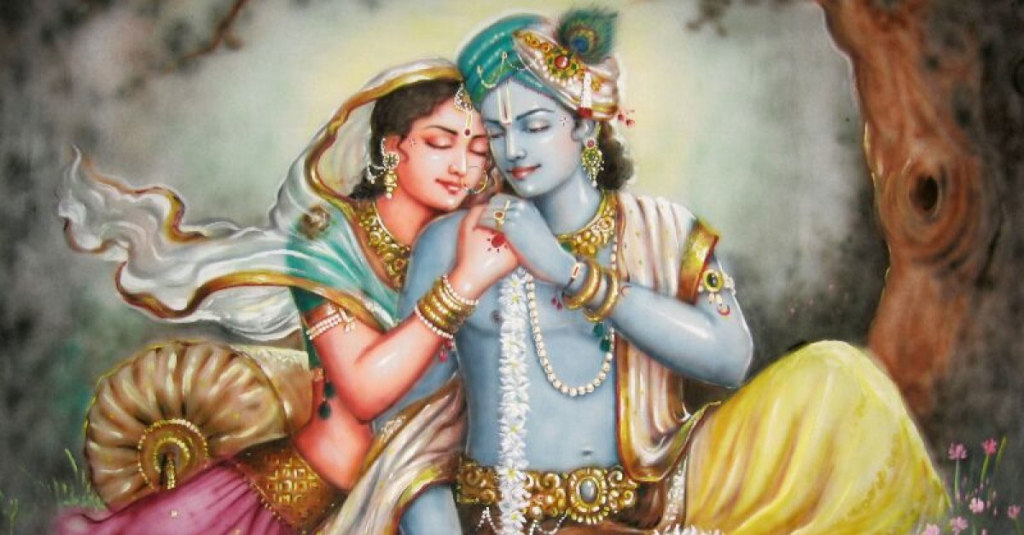 Deriving Strength from Your True Love

Krishna was the eighth avatar of Lord Vishnu and derived all His strength from Radhika. There were many cow-herding maidens in Vrindavan, who desired the love and company of Shri Krishna, but it was Radha to whom Shyamsundar lost His heart. Though Krishna never married Radhika, she was by the Lord’s side during His entire stay in the holy Braj. Thus, their love story remains eternal. It means that we must completely trust our partners through thick and thin, making them our strength and not weakness. 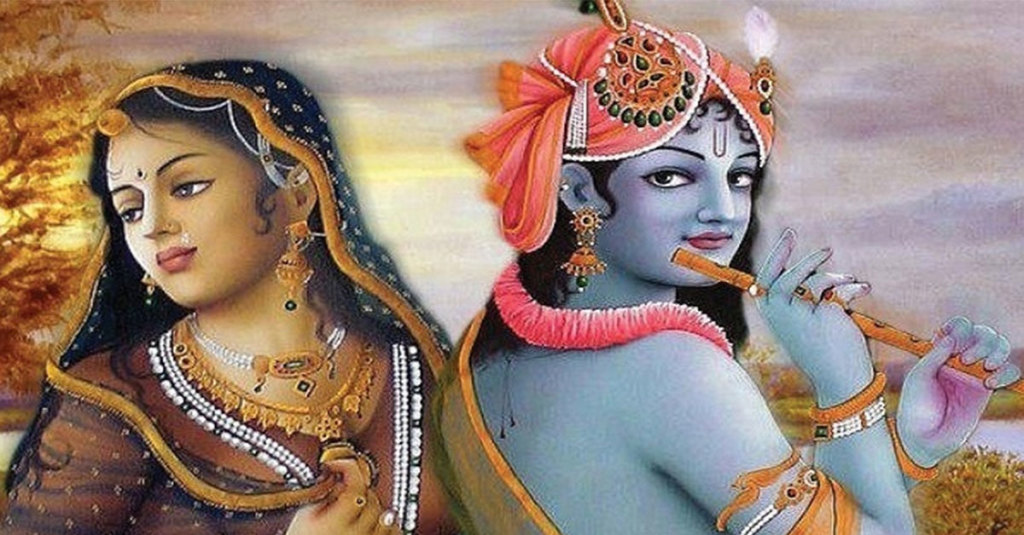 Pure love is one that is always unconditional. Love in the true sense of the word means sacrifice; it does not always mean not getting but also letting go. Radhika always knew in her heart that Krishna would never marry her. However, that did not make any difference to their undying love for each other. Their love was spiritual, on a sacred level, and beyond the understanding of the materialistic world and its limitations. True love is about sacrifice and Shyamsundar’s paramour relationships are of the highest spiritual excellence, and therefore Radha-Krishna’s love for each other should never be perceived from the physical parlance. Their love is indeed divine and supreme when construed as a form of sacrifice and dedication through which Radhika approached Shyamsundar, the universal self.

The Radha-Krishna romance can never be explained from any worldly or materialistic perspective. Radhika’s devotion for the Lord is unparalleled, proclaiming the ultimate union between the human soul and the Supreme Godhead. The eternal love between Krishna and Radha is beyond human cognizance.

Wouldn’t it be wonderful to live in the place where Krishna spent the blissful years of His life with Radharani?  A home in Krishna Bhumi gives you just that. Live blessed surrounded by lush greenery and a beautiful environment where you can feel the Lord’s blessings each moment of your life. Alternatively, you could also visit Vrindavan whenever you wish to through a Krishnabhumi Holydays membership.

Now that Janmashtami is over, Ganesh Chaturthi, one of the popular festivals in India, is being celebrated with much pageantry, dedication, and fervour. Lord Ganesha, who is perceived as the elephant head God symbolises good fortune, wisdom, and prosperity.  Ganesh Chaturthi is celebrated in different parts of our country including Vrindavan, the land of Shri Krishna, where pandals are built throughout the holy town. There is a strong connection between Devakinandan and Lord Ganesha, according to the Hindu mythology. There is a popular belief that you should not look at the moon on the auspicious day of Ganesh Chaturthi. Else, false accusations and criticism would come one’s way. However, according to the puranas, it is written that even if an individual gets a glimpse of the moon by mistake, he or she can invalidate the curse by learning about the story associated with Ganesh Chaturthi. 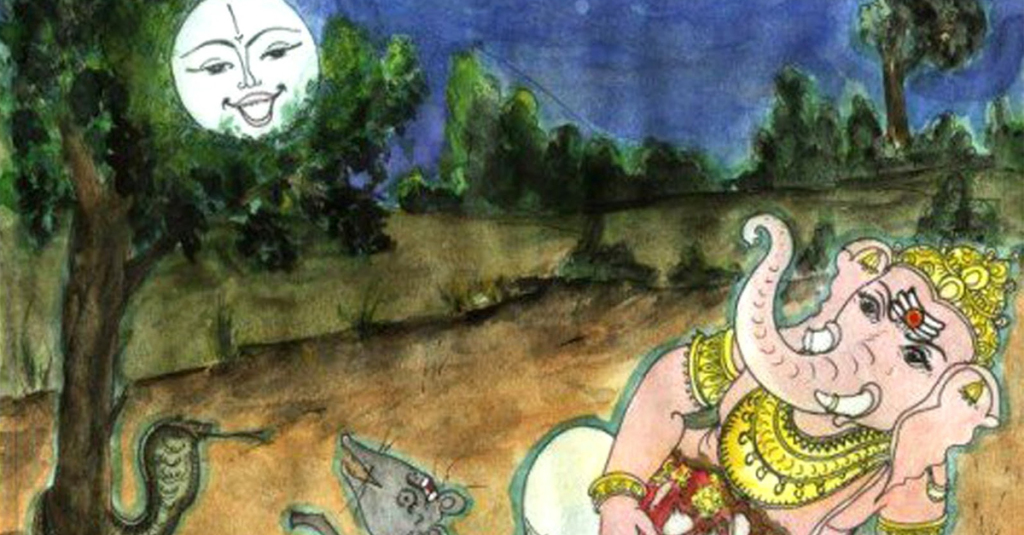 There is an interesting story related to Ganesh Chaturthi and its significance. With all the Gods worshipping Lord Ganesha, Kuber, one of the wealthiest inhabitants of paradise organised a grand feast for Ganesha. The happy and cheerful elephant-head God ate all the delicious food to his heart’s content. However, he soon felt uneasy and sensed that due to overeating, his stomach would burst. His belly grew very large and with its round shape and Ganesha’s short build, the Lord was unable to bend. The moon observed Ganesha’s plight from the sky above and laughed at him. Thus ridiculed, Lord Ganesha lost his cool and cursed the moon. The curse was so strong and forceful that even Shri Krishna could not escape Ganesha’s wrath. 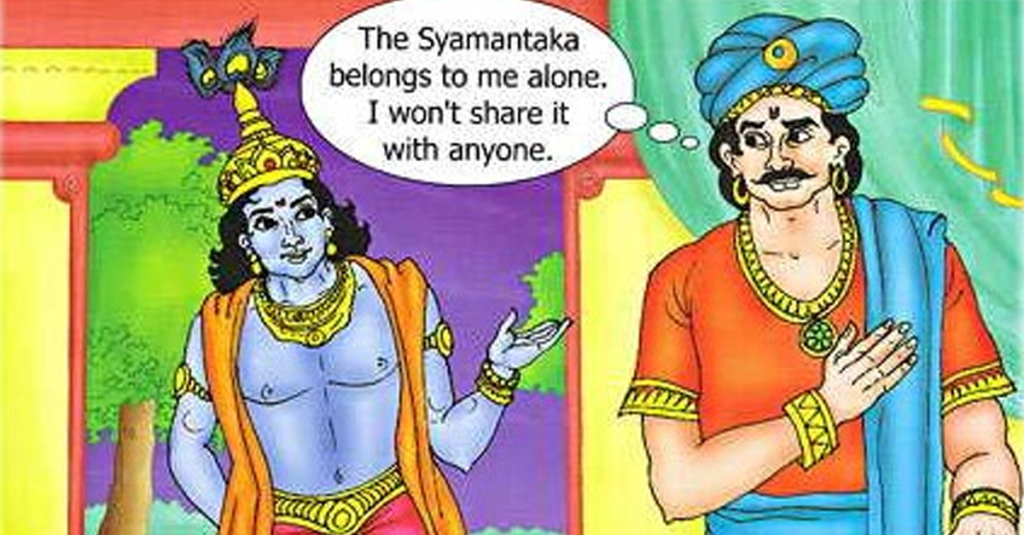 Once upon a time in Dwaraka, Shri Krishna’s homeland, lived the king Satrajita, who was also an ardent follower of the Sun God, Surya. As the mighty king worshipped with much devotion, Satrajita was gifted a brilliant and powerful gem called the Syamantaka. It was thought that whoever worshipped this gem with all his heart would be rewarded with lots of gold in return, which signified abundant wealth and prosperity. One fine day, Devakinandan wanted to take a look at this magnificent gem, but was never allowed by Satrajita to see the same.

On the fourth day of the moon, Rukmini, Devakinandan’s wife, served the Lord some kheer. While Shri Krishna was savouring the delicious pudding, He saw the reflection of the semi-circular moon, cursed by Ganesha. On seeing the crescent moon, Lord Krishna realised that He too will have to face Ganesha’s curse.

During this time, Prasena, the brother of king Satrajita, goes on a hunting trip, carrying the powerful Syamantaka gem with him. Unfortunately, Prasena was attacked and killed by a lion, mistaking the glittering gem as fresh meat and took the precious jewel into the cave. 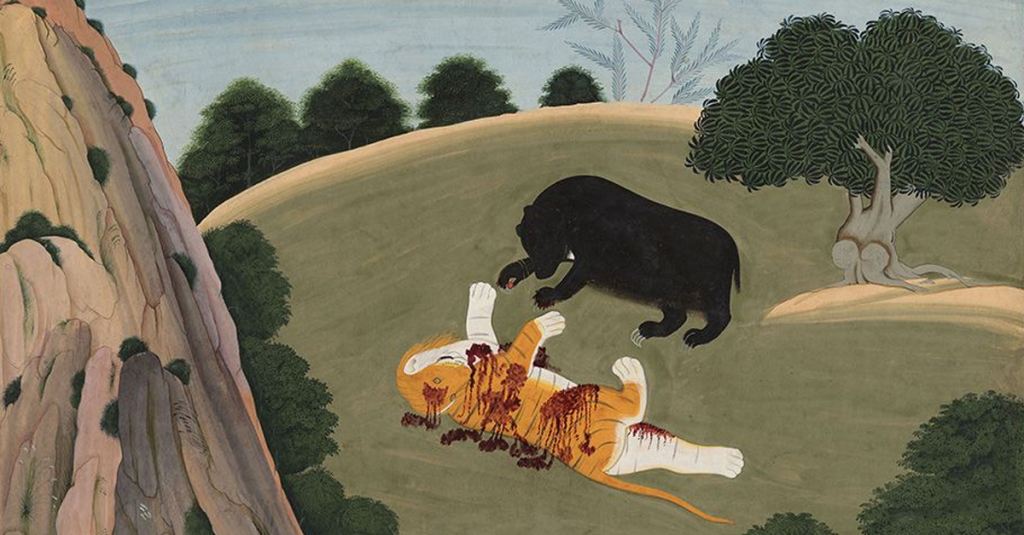 Jambavanta, the bear who rescued Sita, Lord Rama’s wife, slaughtered the lion and handed over the gem to Jambavanti, his daughter. When Satrajita learned about his brother’s death, his suspicion fell upon Krishna. The king thought that Devakinandan killed Prasena in greed of the powerful gem. Hearing of these allegations, Shri Krishna was extremely sad and filled with remorse. Therefore, He went to look for Prasena Himself, king Satrajita’s brother, and discovered his corpse outside the lion’s cave. 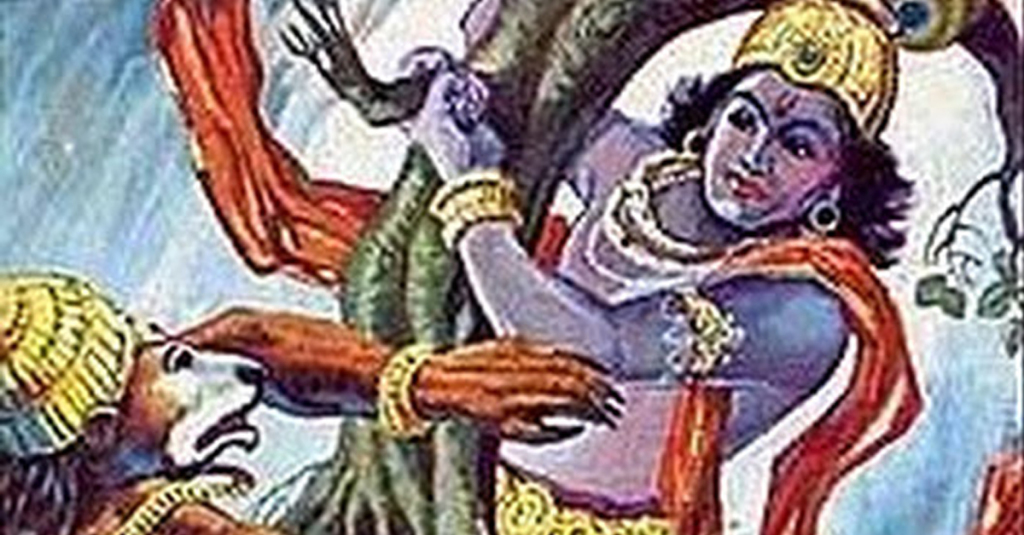 Lord Krishna followed the lion’s footprints and entered the cave. This is where He found Jambavanti with the gem. Jambavanta thought that Devakinandan wanted to attack his daughter, for the magnificent Syamantaka, and asked Krishna to fight with him. The battle continued for 28 long days and Jambavanta failed to compete with Devakinandan, who was a trained warrior. After which he realised that Shyamsundar was no ordinary person and requested Him to disclose His real identity. 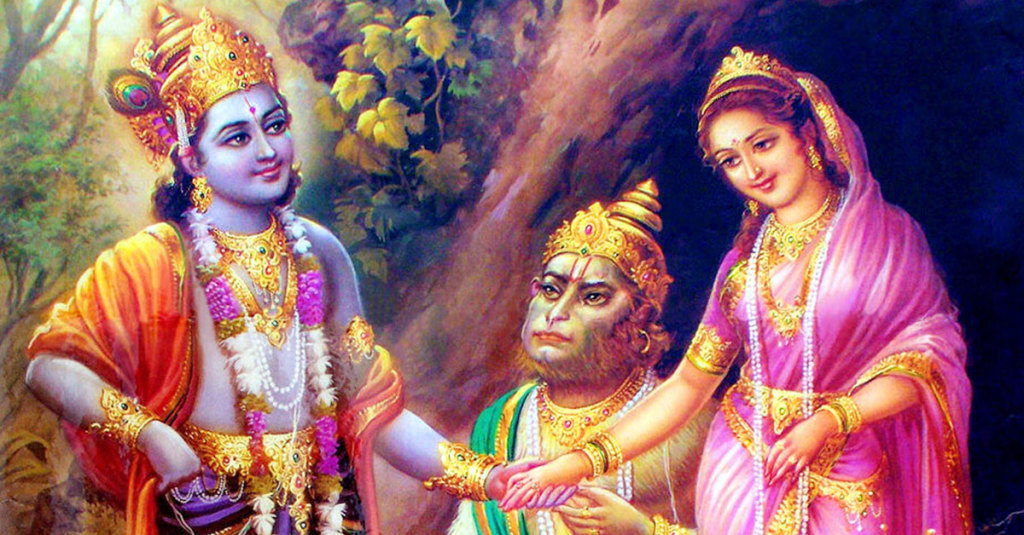 Revealing His true identity, Krishna reminded Jambavanta that He was born as Lord Rama in His preceding life and how Jambavanta helped Rama to rescue Sita. When Jambavanta realised what a blunder he had committed, he gave his daughter and the precious Syamantaka gem to thank Krishna. After His marriage, Devakinandan went to visit king Satrajita and returned Prasena’s corpse and the gem. Satrajita feeling sorry begged for Krishna’s apology and asked the Lord to marry Satyabhama’s, the king’s daughter and requested Devakinandan to protect the precious gem Syamantaka.

According to the Hindu mythology, people believe that Krishna had to bear Ganesha’s curse and thus faced these allegations. From that day, Devakinandan started to worship Lord Ganesha.

The holy Braj celebrates not only celebrates Ganesh Chaturthi, but also many other festivals. So, come and experience the magic called Vrindavan, where you get to hear many beautiful stories related to the Supreme Godhead, Krishna. You can explore this magical land through a Krishnabhumi Holydays membership and also own one of the luxurious apartments in Krishna Bhumi, the temple township in Vrindavan. 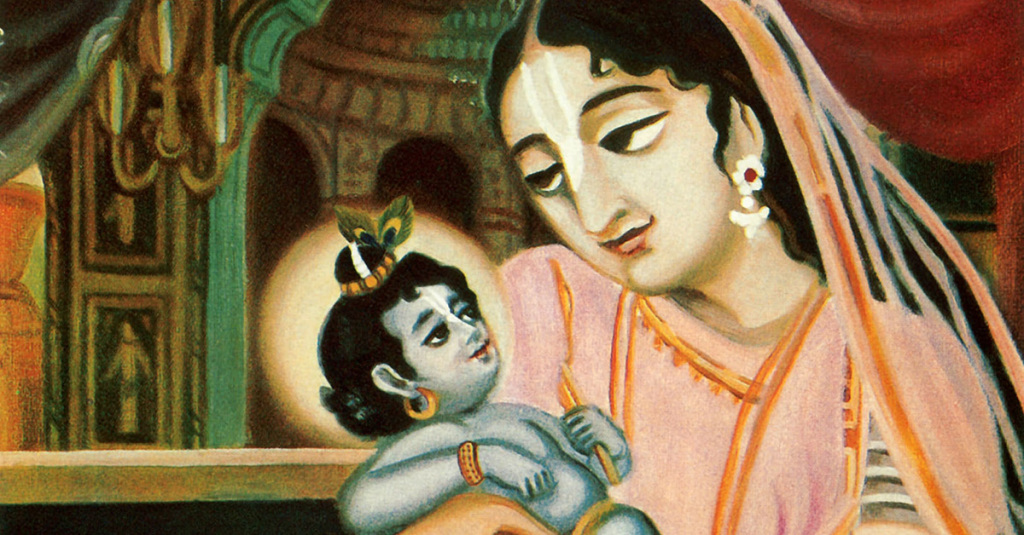 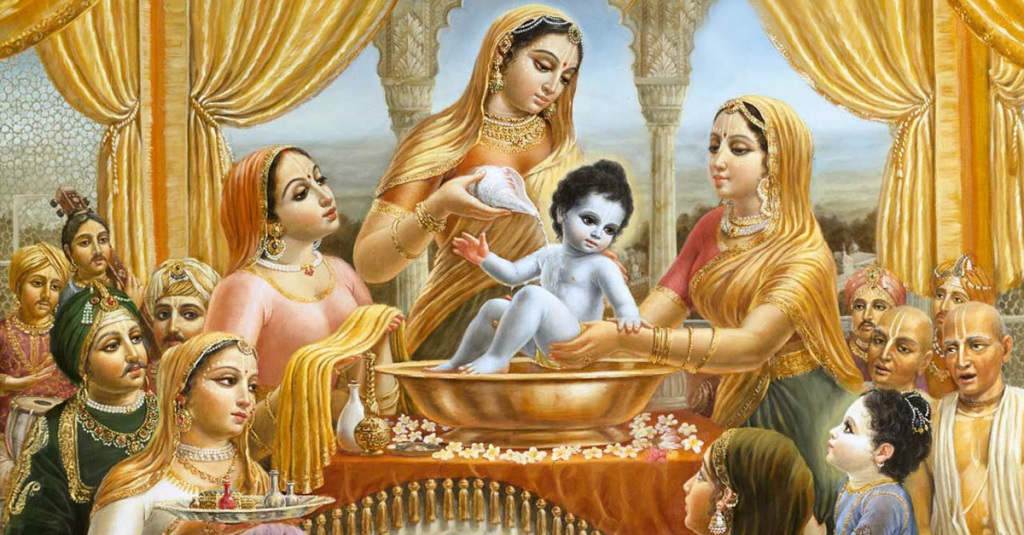