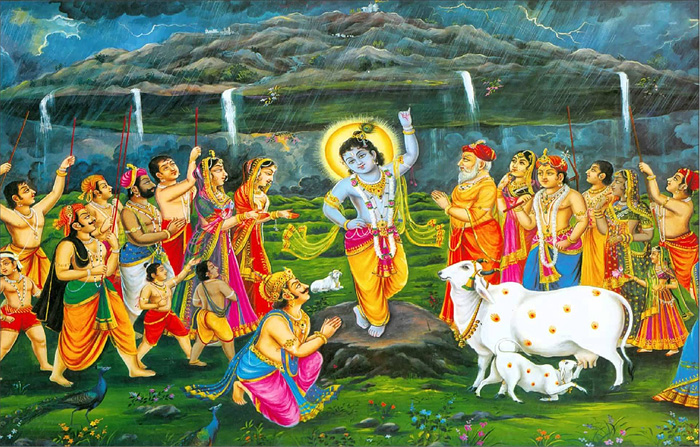 There is an interesting story in the Bhagwata and other Puranas about Shri Krishna lifting the ‘Govardhan Parvat’ or Govardhan Hill when he was only a small child. The story goes like this:

Once, when the elder people of Braj including Nanda Maharaj were planning for the Puja of Lord Indra, Shri Krishna, a child then, questioned them as to why they were doing so. Nanda Maharaj explained to Krishna that this was done every year to please Lord Indra so that he continued to grace the people of Braj by providing rain as and when required. But little Krishna debated that they were farmers and they should only do their duty or ‘Karma’ to the best of their abilities, by concentrating on farming and protecting their cattle, rather than performing pujas or conduct sacrifices like this for any natural phenomenon. Finally convinced by Krishna, the villagers did not perform with the puja.

Furious with the inhabitants of Braj for listening to the little child Krishna and worshipping the Govardhan Hill instead of him, lndra, the King of Heaven, decided to punish them by sending terrible rain clouds to flood the land of Vrindavan. Calling the Samavartaka clouds of devastation, lndra ordered them to lash upon Vrindavan with torrents of rain and thunderstorms and cause extensive floods that would destroy the livelihood of the inhabitants.

As terrible rains and thunderstorms ravaged the land and submerged it under water, the frightened and helpless inhabitants of Vrindavan approached Lord Krishna for help. Krishna, who understood the situation perfectly well, lifted up the entire Govardhan Hill at once with His left hand, and held it up like an umbrella. One by one all the inhabitants of Vrindavan, along with their cows and other household possessions, took shelter under Govardhan Hill. For seven days they stayed under the hill, safe from the terrible rains and surprisingly undisturbed by hunger or thirst. They were also astounded to see the huge Govardhan Hill resting perfectly balanced on Krishna’s little finger.

Stunned and mystified with the order of events, King Indra called back the clouds of devastation, thus stopping the thunderstorms and the rains. The sky became clear again and the sun shone brightly over Vrindavan. Little Krishna asked the inhabitants to return home without any fear, and gently placed the Govardhan Hill back to exactly where it was. All the inhabitants of Braj including Nanda Maharaj, Yasoda and Balarama hailed Krishna and embraced Him with happiness.

This was how the false pride of King Indra was shattered to pieces. He came to Lord Krishna with folded hands and prayed to Him for forgiveness. Shri Krishna, being the Supreme Personality of Godhead, bestowed his grace on Indra and also enlightened him about his ‘Dharma’ and duties.