In order to speed up the cleaning of sewer lines, the Water Corporation in Vrindavan has increased the number of workers who are engaged in this task. Corporation personnel say that within three or four days drainage into the Yamuna from several of these lines will be ended. The Yamuna Rakshak Dal’s national director, Jai Krishna Dasji Maharaj, said that he was happy with the action of the Corporation.

“We have been agitating for a full stoppage to the spilling of black water into the Yamuna for years. That some action is finally being taken is very encouraging. Let us hope that all sewers that are currently draining into the river be completely stopped.” Three days ago, company representative Suresh Pal Singh came to examine the river in Mathura.

He surveyed the river bank from the Masani Pumping Station to Swami Ghat, Vishram Ghat, Bangali Ghat, Mahadeva Ghat, and Dhruv Ghat.
The skimmer now being used in Mathura was made in the USA. The skimmer draws floating debris to a depth of one and a half meters below the surface. It has a storage capacity of 4.7 tonnes. Later the detritus is transferred to a landfill. National Secretary of the Yamuna Muktikaran Abhiyan, Radha Kanta Shastri said that after long efforts to move the Government to clean up the rivers, something is finally being done and they are very happy about it. 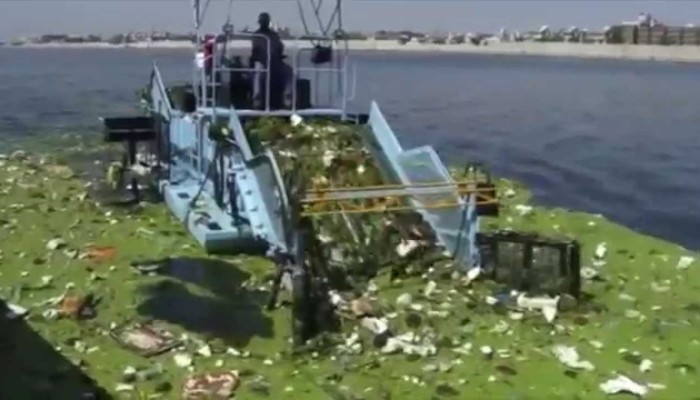