The man being called the modern age Shravan Kumar came to Vrindavan carrying his old and blind mother on his shoulder for pilgrimage purposes.  Shravan Kumar stayed at the Balaji guest house on Sunday in Vrindavan and left Monday morning after prayers and breakfast. Many activists and social workers also came to the guest house to meet him and take the blessings of his mother. They also gave gifts of daily need items and food to them for their journey ahead.

He has made a contraption, like a weighing scale with a basket balanced on each end.  On one end sits his mother, while on the other end all of their worldly belongings are placed.  This basket is then slung across his shoulders and he carries it wherever they plan to go.  Shravan Kumar alias Kailash Giri is a resident of the Hanoi village (Jabalpur district of Madhya Pradesh). 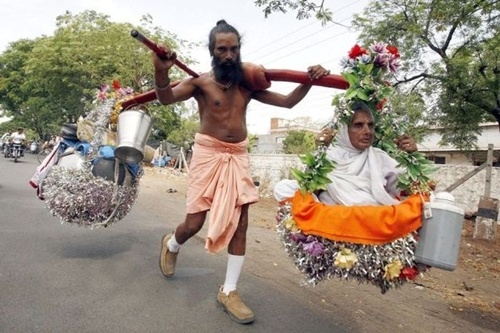 Once, his mother innocently expressed her wish to go on pilgrimage to char – dham on foot.  Since then, for last twenty years he has been carrying his mother on his shoulders.  Being poor and not having enough money for the fares, Kailash Giri decided to fulfill the wishes of his mother by doing this unique on-foot pilgrimage.

Amma embraced brajwasis during her visit to Vrindavan:

Mata Amritanandamayi, famously known as Amma, visited Vrindavan and had darshan of several temples of…