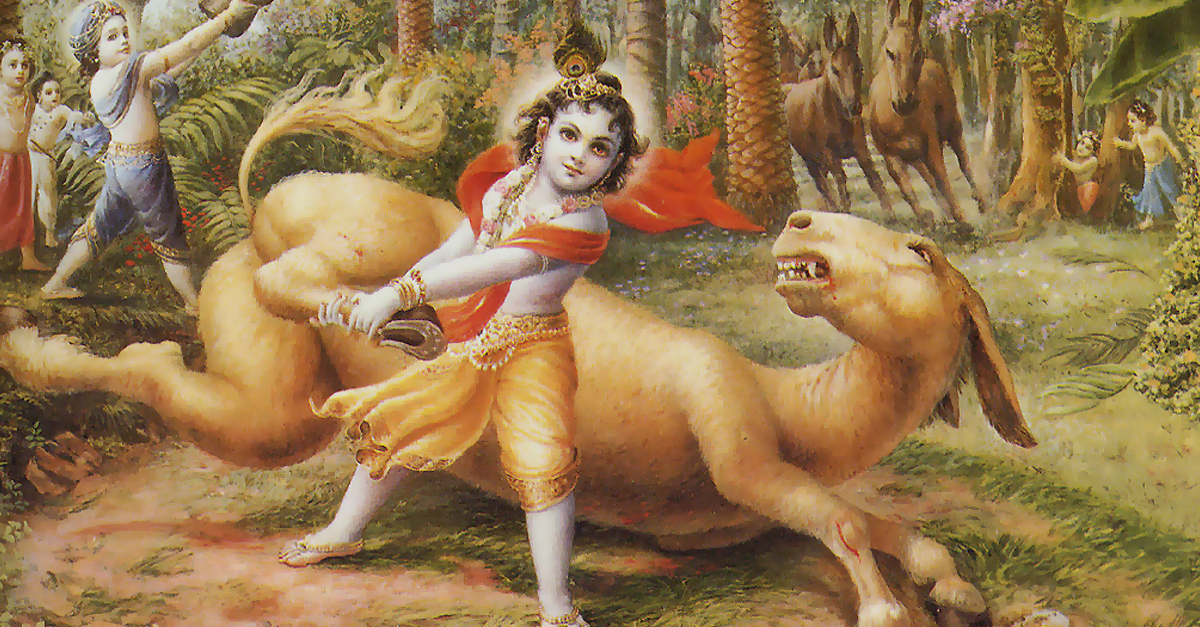 One of the twelve enchanting principal forests of Braj that is being recreated with the vast greens around the Vrindavan Chandrodaya Mandir at Krishna Bhumi is the forest of Talavana. The forest gets its name from the ‘Tala’ or Palm trees that grew in abundance in this specific part of Vrindavana. Situated about six miles south of Mathura and two and half miles south-west of Madhuvana, Talavana is the forest where Lord Krishna’s elder brother, Shri Balarama ji killed the demon Dhenukasura as well as his ass-opiates.

Krishna’s uncle and the cruel king of Mathura, Kamsa had appointed one of his followers and a demon, Dhenukasura, to guard this forest. Dhenukasura had carefully performed this duty along with his wives and sons, killing anyone who entered the forest to collect or eat the ‘Tala’ fruits from the palm trees. Only Kamsa and his followers were allowed to enjoy the forest’s sweet fruits.

When Lord Krishna and his elder brother Shri Balarama were over six years old, they got the permission to take the cattles out for grazing. Along with their fellow cowherds the two brothers too began to take their cattle to the different forests and pastures of Vrindavana. One day, while herding the cows, Krishna and Baldev together with the cowherd boys wandered near Talvana. The boys told Krishna and Balaram that they were hungry and could smell the sweet, ripe tala fruits coming from nearby. But they were scared as the forest was guarded by the demon Dhenukasura who killed anyone trieng to eat fruits from the forest. Hearing this, Krishna and Balarama led all of them to Talvana. There they began to shake the trees and the fruits started to fall making a heap of sweet fruits under the trees. As the cowherds began enjoying fruits they made great noise as well. Disturbed by this noise, the demon Dhenukasura arrived there with his followers in the form of donkeys to hide their real identity and confuse Krishna, Balram and his friends. Then Dhenukasura and his followers attacked Krishna and Balarama with great force by kicking Them with their hind legs. But Shri Balarama effortlessly got hold of the hind legs of Dhenukasura. He whirled the demon over his head in the sky and threw him on to the top of a huge palm tree, thus killing him instantly. During the course of this, His brother Lord Krishna also started killing Dhenukasura’s donkey followers by throwing them around, and soon their remains along with the numerous palm trees that fell contaminated the entire forest.

Days after the killing of Dhenukasura and his followers, when Talvana was clean of their remains and the trees and grasses had fully grown again, people began coming to Talavana and collect fruits while animals returned to graze on its lush grasslands again fearlessly.